Idris Khan is cited in project 1 as an artist who overlays multiple images/texts to produce single frame and highly complex layered compositions. I have concentrated on the works that are overtly photographic here, but, I admired much in Khan’s practice and he seems to thrive on playful experimentation. Of particular note are his ‘Chalk’ and ’21 stones’ series.

Frustratingly, Khan does not have his own website and understanding his development and methods would have benefited from a chronological presentation of his work.

“Drawing inspiration from the history of art and music as well as key philosophical and theological texts, Idris Khan investigates memory, creativity and layering of experience. Khan’s work in media including sculpture, painting and photography – rely in a continuous process of creation and erasure, or the adding of new layers while retaining traces of what has gone before. He is well known for his large-scale works in which techniques of layering are used to arrive at what might be considered the essence of an image, and to create something entirely new through repetition and superimposition.”

I admire the development of Khan’s practice – over a period a time he has focused on the idea of creating composite images which combine either a photograph, artwork, text from a book or musical score and subtly developed this. Dyer (2006) says this:

“He is a conceptual artist in the straightforward sense that thought is implicit in the act of looking at his work…Khan’s work is dense, multilayered (literally) and profound.”

In my research I found no evidence of criticism in reference to Khan’s use of appropriation. I wonder if this is because the images can be justified as works of art in themselves – the craft and work that goes into them is clearly visible. On the Guggenheim website, the comparison is made with Sherrie Levine who used a strategy of appropriation to critique the notion of originality. While I would agree there are similarities because both artists use the work of others, Levine’s stance is one of confrontation which challenges the notion of artistic genius and the idea that she could be the originator of an artwork at all. Khan literally obscures this idea (although it is still present) which makes his work more focused on themes of time and memory.

Khan has produced a number of works which combine series by other photographers such as Bernd and Hiller Becher, Eadweard Muybridge and Nicholas Nixon. The combination of the Becher’s work is particularly successful and instantly shows the subtle differences in each of the individual images while emphasising the similarities and meticulous technique in form that attracted them to photograph industrial landmarks as if they were monuments. The Muybridge pictures undo the intended purpose of photography as a tool to study movement – the effect is like watching a film sequence in one go. Nicholas Nixon photographed his wife and her three sisters once a year over a period of 40 years and the combination of these pictures creates an unsettling and ghostly final image. Details can just be made out of each of the women – they are like apparitions and the ageing that we can witness in each individual image is amplified. I am struck by a sense of melancholy brought on by the realisation of the sisters mortality which in turn reminds me of my own. 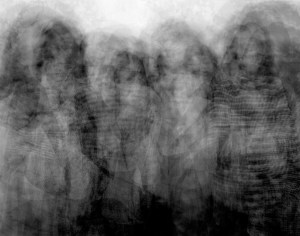 The approach to these series’ is similar to that of the photographic works, the immediate and obvious difference however is that these composites of printed text and music scores transform the subjects from something that relies on recognition to be understood (writing and musical notation) into a completely abstract, graphic and visual artwork. Khan first photographed every page of books that are important in the field of photography and cultural theory such as Barthes ‘Camera Lucida’ and Sontag’s ‘On Photography’ but it is ‘Every page of the Holy Qur’an’ (2004) that is his most personal work and a natural progression from the earlier Barthes and Sontag pieces. Although he stopped practicing as a Muslim when he was 14, there is an acknowledgement of the influence Islam had on him, significantly, it is his fathers Qur’an that he photographs. There is also an important resonance between the repetitive nature of Khan’s process of making art and the way the book is read, a page a week, meaning that the same page is returned to many times as well as the significance of ritual and repetition in the faith.

Although Khan photographed a number of composers scores it is ‘Struggling to Hear…After Ludwig Van Beethoven Sonatas’ (2005) that resonates with me particularly because of the overt reference to Beethoven’s deafness in the caption.

To coincide with the 2012 London Olympics Khan was commissioned by the New York Times to produce images of the city. Between 70-100 postcards of famous landmarks are appropriated and composited to make the final images. Khan describes using Barthes notion of the punctum to build up the final works by not necessarily taking the whole of each but choosing elements that stand out. He goes on to describe the final effect as the distillation of the essence of each building – the famous landmarks are recognisable but abstracted in a way that replicates the way we might remember such iconic structures.